Wednesday we had the first London Salesforce developer meet up for the new year. It was great to catch up with some old timers but also great to see so many newcomers! This was the second timeÂ Make PositiveÂ have hosted us, and thanks for all the beer and pizza!!

John Stevenson (@jr0cket)Â kicked off the evening, well after the pizza and beer anyway, giving an overview of developer user group and the Meetup.com groupÂ (slides here). But the key takeaways from him were:

The First speaker wasÂ Robert WardÂ from Cloud Objectives a cloud implementation parter, heÂ gave an update on the Marketing Cloud and that he believes there is now aÂ great opportunity to integrate marketing solutions.

Our second speaker wasÂ Rob Cowell,Â Senior Analyst from Ticketmaster. He showed us a demo of a cloud mashup he had worked on at Ticketmaster. The problem he was given was to create a systemÂ to allow contractors to upload health and safety documentation and answer a multi-part questionnaire. It needed to be externally available, easy to use, ability to track changes and versions and finally it needed to be implemented in a couple of weeks.

He solved the problem using a Heroku and SalesforceÂ mash-up. He went with theÂ Play! Framework with a bit of jQuery.Â Iris Couch a hosted CouchDBÂ database provider which has version control and supports attachmentsÂ and finally theÂ Force.com platform.

So how did he stick it all together? Firstly he created a new play! Framework application. Its Java but with all the pain and hassle taken out. If you change your code and hit refresh on the browser, you see the changesÂ immediately with no manual compiling! It also has a great library of components including theÂ Ektorp library for CouchDB (a noSQL document based database),Â jQuery, jQueryUI and PLUpload (nice little plugin for multiple file uploads and drag and drop). This allowed him to implement the “save for later” functionality before the submission was finally submitted to Salesforce.

But the biggest win:Â It was totally free. CouchDB is really good value, $5 usage creditÂ is creditedÂ for free each month which based on their estimates would be more than enough,Â and Heroku would only need one web Dyno which is also free. Very compelling. Nice job!!

Look forward to seeing everyone at the next meetup! 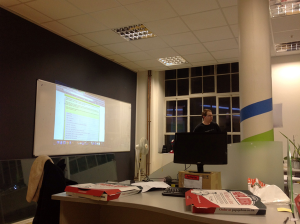 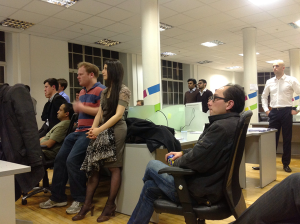 Salesforce London Dates for the diary: