London’s Calling what you missed & how it came together


Missed London’s Calling? Checkout the video above! But this is how it all started…

It all really kicked off just before Dreamforce 2015 with Jodi Wagner, Simon Goodyear, Louise Lockie, Kerry TownsendÂ & several bottles of Champagne. We were sitting around the table and the conversation turned to something I think we had all been mulling over for some time. The creation of an event for the Salesforce community, BY the Salesforce community. An event where we could learn from community experts in Salesforce who had been at the coal face. An event that wasn’t a Sales event, but an event for Salesforce Admins & Developers designed to help us learn from each otherÂ and find out about new Apps in the Salesforce ecosystemÂ whilstÂ have fun doing it! 🙂 Needless to say, Will Coleman turned up and more Champagne was drunk and then… 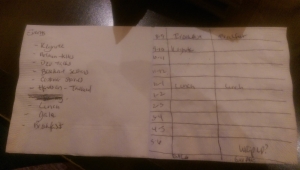 London’s Calling was born… Our first rough sketch of the event (on the back of a napkin) consisted of a two-day event, this quickly reduced down to one day. Let’s “start small” and see what happens, hey no one may turn up!

None of us had run an event of this scale. I’ve been producing theatre productions in London for many years, so running an industry event can’t be that different? can it?… We hunted out community leaders who had created similar events in the US. We contacted MidWest Dreamin who had run their event for a couple of years. Their event had grown to over 40+ sponsors & around 800 people (if my memory serves). Their advice was INVALUABLE! Keeping the core team small initially to keep decision-making quick, the importance of a printed agenda/event guide, driving traffic to sponsors booths, the importance of cash flow & everything being transparent and most importantly non-profit among many other things.

We fired a survey out to people to see who would be interested in turning up to get an idea of numbers, also answer questions about the ticket price. We knew this event was going to cost quite a bit to run. One key question I had was “Why would you pay to go to London’s Calling if Salesforce World Tour isÂ free”? For me, it became a question I asked myself throughout the planning process. What should the balance be between sponsors booth prices and ticket prices?. Was there anyone out there who would want to sponsor or even speak at London’s Calling? (at one point we did think it would be just the speakers listening to each others talks).Â In the end, we had 68 people asking to do a talk and we only had 28 sessions, which was brilliant, but we had to turn down some great talks.

From the beginning, we knew cash flow was potentially going to be a problem. When I create theatre productions the venue almost always offers a box office split and they run the box office. In our case, we had to pay for the venue up front which was by far our single biggest expense. So we wanted to make sure we got the sponsors in early and incentivised them to pay early by allocating the best booth space & logo positioning based on who paid first. It seemed to work quite well. In the end incentivising the sponsors and doing the super early bird & early bird tickets (which each sold out in a day respectively) more or less did the job! At least the rest of the costs (food, drink, bags, t-shirts etc) we’re for payment nearer the event time.

We dividedÂ ourselves up with jobs. Simon in charge of the sessions, Kerry in charge of Sponsors, etc.. which seemed to work although I WAY underestimated the amount of times I had to head to the bank!… but that is a story for another day 🙂

Slack ran the project (well and a Salesforce org of course!). Constant messages backwards and forwards checking if this or that was correct. It was just a pity the rest of the team didn’t work in my work time which was usually between 11 pm and 1 am 🙂

We started having a face to face meeting with each other every two weeks;Â this turned quite quickly into every week.

We’re having a “London’s Calling” debrief tomorrow with the team (we’ve been sleeping and avoiding each other ever since the event). Simon has had some re-adjusting to being outside “the hive mind” but we have somehow managed to come out the other side without killing each other.

Hopefully next time will be easier, we now have a lot we can now re-use (the Event Guide, the banner templates and banners). The event guide did take a lot longer to create. I based it on the theatre programmes I create, maybe 8-10 pages MAX, the event guide & flyer came in at a monster 26 pages! IÂ hadÂ unfortunatelyÂ forgotten about the session descriptions! Also just the knowledge of running the event will be helpful for next year. We had no idea at the start what “Sponsor Management” would mean, we do now 🙂 Who would have thought that sponsors would prefer to pay with their credit cards rather than bank transfer?!

I also got the feeling that people didn’t realise that we would sell out? We had to increase the numbers twice and our poor sponsors had to dig around for extra swag! But hopefully, they liked that more people turned up! We received some emails from people saying they had booked a train or EuroStar or flight for the event but failed to buy a ticket. Maybe next time they will purchase the ticket in advance.

I do love Trailhead and what it has brought to learning Salesforce, but I still believe that nothing beats coming together and learning in a blended style of learning, where classroom and online learning can work hand in hand. Hopefully, this is the start of that approach within Salesforce, but also to celebrate the Salesforce community and how diverse and helpful it is. I learnt Salesforce from the community, I do hope it continues around the world.

My hope is that London’s Calling has lit a spark for more events like this around the world… I’m going to the French one hopefully if it doesn’t clash with my wedding! 🙂 LC was a lot of hard work but worth every hour of effort. Maybe we got lucky? but I think it was just down to a great team :). Simon, Jodi & Kerry are just brilliant to “work” with… Roll on next year?

What about if we organise something like this awesome #LondonsCalling event in France this year? Will you come? pic.twitter.com/HRUbEtIYeP

Missed out on the Sessions? check them out on YouTube!

Just a couple of Tweets

We have had so many amazing comments about the event, here are just a couple of Tweets but check the video above for more!